Ireland’s economic aspirations in fashionable high-tech and sciences industries are well-known and based on sound thinking, yet it is a more familiar and traditional industry – food and drinks – that has become even more critical to national fortunes of late.

The crash of 2008 marked the start of a sustained period of strength for the Irish food and drink industry that shows no signs of diminishing. This was confirmed by the release of Bord Bia’s figures for 2013 which showed that the country’s food and drink exports approached some €10 billion for the year – an increase of 9%. Export revenues for the sector are now some €3 billion or 40% higher than the figure for 2009.

Of course any meaningful analysis of the food and drink sector requires that it be split into its sub-sectors and the table below shows the remarkable diversity of the industry sub-sectors as well as the contrasting performances. 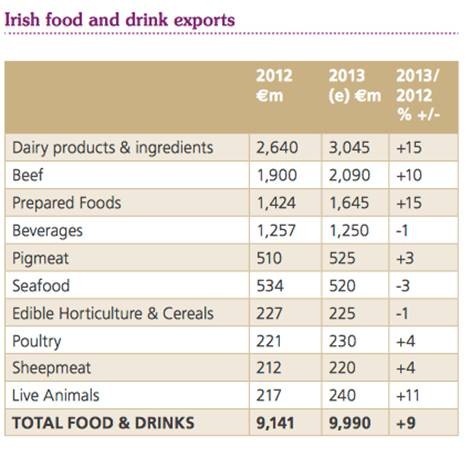 Dairy, meat & livestock and prepared foods let the way in terms of growth in 2013, with the added benefit that these are the biggest sub-sectors in the industry. Beverages felt the effects of a competitive market environment, although whiskey continued to perform very strongly, according to Bord Bia. Seafood saw a levelling off in exports following a rise of almost 65% over the 2009 to 2012 period.

The United Kingdom is by far our largest food and drink trading partner with 42% of the market. Bord Bia reported a stronger performance in terms of exports to Continental Europe in 2013 with an increase of 11%: “Key markets included Germany, France and the Netherlands, all of which recorded double digit growth.”
International trade “continued to be driven by strong exports to Asia and Russia,” with a 6% rise to €2.6 billion.

The principal cause of the excellent performance in recent years has been increased prices all round. This compensated for reduced volumes of late but 2013 saw a reversal of that trend with growth in volumes across key categories, most notably beef and dairy. Beef output was almost 5% higher while milk production jumped by more than 2%. Both categories also recorded price increases and in the case of dairy this was the key driver of growth.

The strategic importance of food and the increasing nervousness over supply has led to food inflation comfortably outstripping general inflation in recent years.

Globally, agricultural commodity prices as measured by the FAO Food Price Index “showed a marginal decline in farmgate prices” during 2013. “This was led by weaker sugar, oil and cereals as supply responded to the higher prices of 2011/2012. This offset a substantial increase in dairy prices with meat prices also increasing, albeit modestly. Prices remain some 60% ahead of the 2000 to 2010 average.”

The immediate and medium term prospects for the Irish food and drink industry seem assured. No better time, therefore, for StubbsGazette to relaunch its annual Food and Drinks Industry Report.

The 2014 edition, which will be published in February, promises to be the most comprehensive analysis of the entire industry. The report will feature financial profiles of each and every industry player together with sector-by-sector analysis from Dairy to Seafood, Prepared Foods to Beverages.

The report will deconstruct the financial statements of some 3,000 companies involved in the industry, generating a wealth of performance metrics such as, where applicable, sales, pre-tax profits, net worth, working capital, total assets and more. In addition, the report will disclose key credit data, such as:

Data will be analysed on a macro, sub-sector and individual company basis. The report will also serve as a valuable research and reference tool with names of key officers, website addresses and other contact details.

The StubbsGazette Food and Drinks Industry Report 2014 will be available in February. It will be followed by a series of other similar reports for other industry sectors.

FAIRFOLD HOLDINGS LIMITED
Resolved 30/12/21 that the above named company be ...
Read More

KNOW THY PLACE LIMITED
Resolved 23/12/21 that the above named company be ...
Read More