Some two years have gone by since the Personal Insolvency Act was signed into law and at last there are clear signs that momentum is building in terms of the numbers of cases going through the system.

Just about everything is stacked against the unsecured lender in the case of a PIA. In the normal course of events they are all but wiped out. This has led to more than a small degree of dissatisfaction on the part of unsecured lenders.

But it is all a matter of perspective. Let’s take an example.

Frank is in difficulties. He has a €140,000 mortgage with repayments of €800 per month. He approaches his lender who agrees to grant him temporary forbearance and reduced the monthly repayments to €40 per month.

But Frank also has a loan with a credit union of €4,500 and the repayments here are normally €400 per month. He approaches his credit union and it agrees to reduce repayments to €150 so long as Frank remains in difficulty.

But Frank’s difficulties don’t go away – in fact they get worse and he is forced to apply for a PIA. His Personal Insolvency Practitioner secures a Protective Certificate that keeps Frank’s creditors at bay as his application is considered.

Negotiations with creditors commence. The perspective of the unsecured creditor in this case is that they are already receiving less as a proportion of monthly repayments due i.e. €150/€450 = 33.3% as opposed to €400/€800 = 50% as received by the mortgage lender.

The perspective of the mortgage lender, however, is entirely different. If the proportion of the repayment being paid to the credit union was applied to the home loan then that repayment of €150 would actually equate to a monthly repayment of €4,667 ((€150/€4,500) x €140,000).

That is why unsecured lenders can expect no mercy when their claims are stacked up against those of secured lenders – never mind that the individual’s home is on the line in which case there may ultimately be nowhere to send personal loan statements.

This hostile environment puts unsecured lenders in something of a quandary – and no sector has more to think of in this regard than the credit union movement.

Credit unions are already facing the prospect of substantial write-offs related to members availing of personal insolvency schemes. But, as we approach Christmas, it is a reminder that access to credit union funds is critical for so many ordinary members of the public and credit unions, already under substantial regulatory pressure from the Central Bank, must like never before scrutinise their controls and protocols over the granting of credit.

And this is not just a matter of judgment – certain provisions of the insolvency law set out fairly clear parameters that would appear to impose a fairly cast-iron lending framework on all lending institutions, specifically the rules around Reasonable Living Expenses (RLE).

1.    Set Costs: these are the normal living costs allowed the applicant depending on the household size and situation as set out by the Insolvency Service of Ireland (ISI) in its Set Costs tables.
2.    Childcare: additional costs allowed depending on ISI guidelines
3.    Housing: reasonable and sustainable sums for rent or mortgage payments
4.    Special circumstances: costs usually relating to health, age or disability related to the debtor and/or the debtor’s dependents 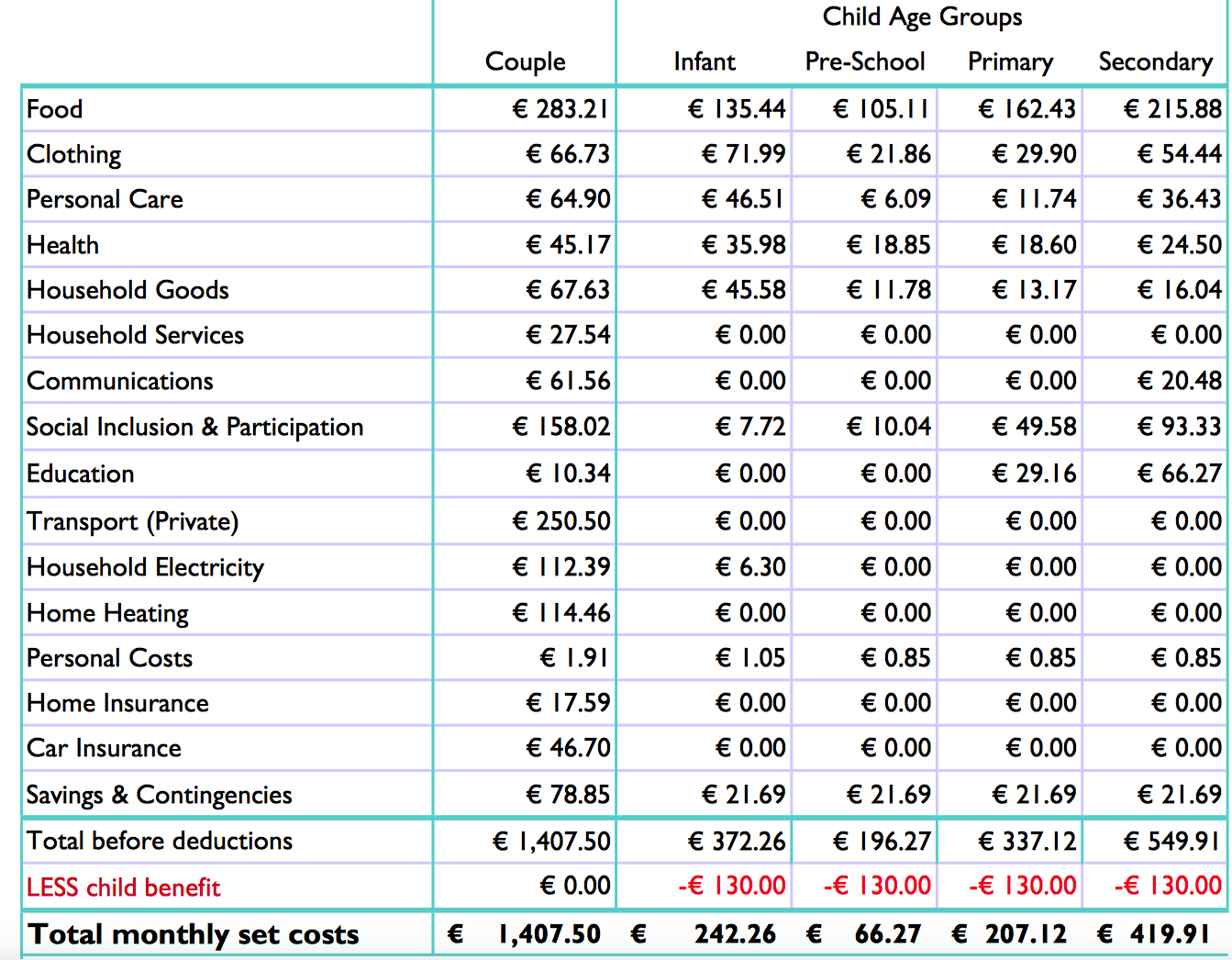 The significant aspect of the existence of Set Costs and Reasonable Living Expenses framework is that it effectively imposes a floor below which a loan applicant cannot be entertained without leaving the lender exposed at a later date should the applicant become insolvent.

This has severe implications for the credit union movement and privately many credit union officers take issue with the amount of set costs allowed by the ISI. For example, under ISI Guidelines below, a couple with one child in primary and one in secondary education would be allowed in excess of €2,000 before housing and childcare is taken into account.

This has many credit union officers privately perplexed. First, because in their view the amount of Set Costs allowed is too high. Second, and in some way validating this view, they are already actively lending to individuals whose income is well below the ISI’s RLE figures.

The appropriateness of the level of Set Costs is a matter of opinion, however what is not in dispute is that the sums have the backing of the law. So long as a Member is making payments, the RLE issue does not come into play. What is worrying to any unsecured lender, however, is that if in the event an individual applies later for an insolvency scheme and the lender has been found to have made the loan while that person’s income was below the relevant RLE figure, does that mean that the unsecured lender has no claim on the debtor on the grounds that the original loan could be considered reckless?

FAIRFOLD HOLDINGS LIMITED
Resolved 30/12/21 that the above named company be ...
Read More

KNOW THY PLACE LIMITED
Resolved 23/12/21 that the above named company be ...
Read More